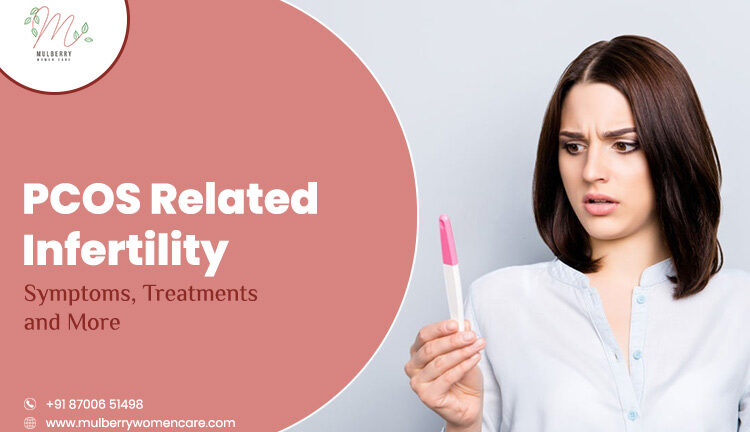 As life gets more hectic, a larger percentage of people are suffering from stress and unhealthy eating habits. Diseases like PCOS (polycystic ovarian syndrome) in women are also on the rise due to lifestyle issues.

Polycystic ovarian syndrome (PCOS) is an endocrine and hormonal imbalance condition that affects 9 to 22% of women of their reproductive age.

The female body’s healthy functioning is dependent on a delicate balance of hormones such as estrogen, progesterone, and androgen. These hormonal abnormalities have a significant impact on one’s capacity to conceive naturally.If you have PCOS and are concerned about your ability to conceive, it is important to consult the best doctor for PCOS treatment to know about the treatment options available.

Feel free to skip ahead if one topic catches your eye:

PCOS is an abbreviation for the polycystic ovarian syndrome. This is a hormonal disorder that causes an imbalance in female reproductive hormones as well as an excess of male hormones in the female body. Ovarian dysfunction, delayed ovulation, and an irregular or absent menstrual cycle are symptoms of this condition.

Before understanding how hormones affect PCOS, it is important to first understand the role of the ovaries in the female body.

The ovaries are important organs of the female reproductive system that produce the female egg as well as reproductive hormones such as estrogen and progesterone. Small quantities of testosterone are also produced by the ovaries. The balance of these male and female hormones is erratic during PCOS which leads to the female body producing excess testosterone. This causes conditions such as insulin resistance, excessive acne and hair growth, and a delayed menstrual cycle. During PCOS, the female ovary produces numerous ovarian cysts or follicles, which impairs the ovaries’ capacity to release eggs regularly resulting in delayed ovulation( release of the egg)

There are some common types of PCOS based on hormone imbalances, and these are listed below.

The type of PCOS and its treatment can only be identified once you consult the best gynecologist for PCOS treatment in Gurgaon.

What are the most common symptoms of PCOS?

The following are some of the most frequent PCOS symptoms.

The impact of PCOS on fertility

PCOS is one of the most common causes of female infertility. As previously stated, conceiving a child requires a critical balance of the female hormones estrogen and progesterone, as well as the timely release of an egg.

When a woman has PCOS, androgen levels rise in her circulation, resulting in delayed ovulation and an irregular menstrual cycle. Pregnancy occurs only when the sperm and egg fertilize, and a lack of ovulation and irregularity complicates the entire conception process. Even if a woman can conceive, she is more likely to miscarry if she has PCOS.

Polycystic ovaries are a key symptom of PCOS that affects a woman’s ability to conceive because the small follicles that form in the ovary prevent the egg from being released properly.

Some women with PCOS can conceive naturally, while others may struggle.

What is PCOS Treatment to Get Pregnant?

It is normal to be concerned if you suffer from PCOS and are unable to conceive. However, it is important to control your PCOS by implementing several lifestyle modifications and PCOS fertility treatments as well as seeking guidance from the best gynecologist in Gurgaon for PCOS.

PCOS is treated with a variety of medications. The common fertility options with PCOS are listed below.

Cost of PCOS Treatment in Gurgaon

The PCOS treatment cost in Gurgaon varies and is subjective. Certain cost-influencing elements are as follows:

The average PCOS treatment cost in Gurgaon is between 10,000 and 15,000, depending on your condition, although this might vary.

Living with PCOS and coping with the issues that come with it, is quite difficult. It is critical to take action and treat hormonal imbalances to avoid future issues with fertility. One of the best ways to achieve this is to consult the best doctor for PCOS in Gurgaon’s top clinic. Mulberry Clinic is one of the best PCOS treatment centers in Gurgaon. Mulberry will handle your concerns with great competence and attention. They offer the facilities and staff, giving you a comprehensive approach.

Begin typing your search term above and press enter to search. Press ESC to cancel.